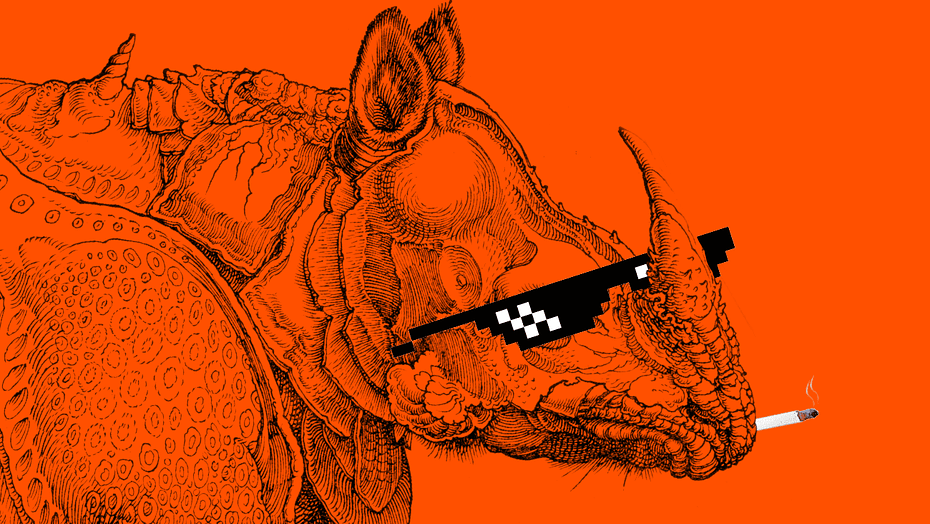 Imagine a time before long distance travel was really a thing. How might you explain the concept of a rhino for example, to a population who’d never left Europe? I imagine it’d be something like this:

“It’s got horns and a sort of armoured, bumpy skin and it’s proper grumpy”

Well, near enough. In fact, early explorers who visited the far reaches of the world returned with similar ‘tales’ of these huge, armoured beasts. In turn, the popular artists of the day tried their hand at illustrating them based solely on these descriptions. The results were… interesting, if not entirely accurate. One such attempt, by the 16th Century German artist Durer, even included rivets on the rhino’s ‘armour’. Now, arguably, this wasn’t Durer’s fault; the source material was most likely a vague or poorly remembered anecdote (a bit like mine). Also, the average 16th Century European would likely be more familiar with badgers or cows, or something – definitely not the big, scary animals of Africa.

Okay, so let’s imagine Durer’s rhino as modern content; an illustrative piece in a blog post or an infographic. If this was released today, in similar circumstances – perhaps of a new alien race – it would be considered sensationalism; simply throwing out a half-baked idea to capitalise on a current ‘hot topic’.

As a designer of content myself, I’m not saying this is a bad thing. Whilst, yes, the explorers’ stories weren’t nearly detailed enough, the results were incredibly popular, and massively influential. Predictably perhaps, they were also short-lived; as more accurate illustrations of rhinos (and a few real-life ones in zoos) followed, Durer’s rhino was all but forgotten.

So, what if those early explorers had been a little more thorough with their note taking? Would the ‘content’ have been more enduring; the definitive illustration of a rhinoceros? Or could it have proven less popular; a byproduct of a more honest, less sensational piece of work?

We can use Durer’s rhino as a theory to try and understand a couple of ways in which content ideas can be crafted. Firstly, the carefully considered slow burner, and secondly, the flash in the pan, drop-it-like-it’s-hot approach.

Some ideas need time; you like this idea and it’s got a hint of something about it but it’s definitely missing something. As with any idea, it needs to be written (probably typed) down – it needs a place to live. For me, that place is Trello, a card-based Kanban-style project management tool.

Trello is great for throwing down idea nuclei and forgetting about them for a while. If an idea has value, you’ll return to it, and give it some love, update it, add some comments or detail, a link to a relevant article or image. Maybe, just maybe, you’ll build up your idea to a point where a more confident piece of content will start to appear.

If an idea has no value then it remains forgotten and eventually you’ll likely bin it (I give most of my ideas about 6 months). The great thing about Trello is you can organise, move and label ideas to your heart’s content and they can be kept private, or shared with your team depending on how confident you are.

Another tool I use regularly is Google Keep; a note taking app that’s simple, uncluttered and distraction free. Plus, it’s where I keep my to-do and shopping lists, so if I do get distracted, it’s easy for me to switch in and out of work and life mode.

Ideas built this way tend to feel stronger and longer-lasting – they’re not always an immediate success, but if researched well they’ll pick up links for years to come.

The Get It Out of the Flippin’ Door Approach to Content Ideas:

Nathan Barley moment: some ideas have to pounce – they live fast and die young. These content pieces capture the mood of the moment and jump on a trend. Sometimes an exaggerated drawing of a rhino is all the public want.

Fast ideas, in my experience, are usually data or poll-led and the story is often revealed after just a few minutes of analysing the data. Ask the UK a question on a divisive subject like “Do You Put Ketchup or Brown Sauce on Your Bacon Butties?” analyse the demographics, and the Daily Mail will be all over it.

But how do you get quick data? Now I’m not saying cut corners, but this isn’t about accurately or scientifically publishing a journal – it’s sensationalism and it’s about getting links. We’d all love to poll half a million people to find out their favourite crisps, but even using Google’s Consumer Surveys will cost you £50,000 to do so. We tend to poll around 1,500 people – it won’t break the bank and we still get a decent spread of the demographics.

Even with a smaller data set, you’ll still find stories and if you think of them in terms of headlines, then the dailies will love them. “Grandad is stealing all your favourite Quality Streets”, “Your Mars bar IS getting smaller” and so on.