Google AdWords, We Need to Talk

I think we both know what this is about, don’t we Google? Recently you’ve been acting up and your behaviour is out of hand. It gives me no pleasure to have to talk to you about this, but you’ve let me no choice.

Stop taking liberties with our ads.

I know you’ve been trying really hard. Some of the changes you’ve brought in have been simply excellent. I’m a huge fan of the Ad Group Ideas beta, and I’m sure the Mobile Apps Extension is going to make a lot of advertisers very happy.

But frankly you’re treating your customers like cash machines – we pay your wages and you don’t give us the respect that we deserve. Let me prove that to you.

I’ll admit this isn’t a total loss, it just isn’t quite good enough. This could have been so useful but you need to follow through and finish the job properly. Yes, helping advertisers to understand their QS is important, but the data you’re giving us doesn’t make sense.

You need to work hard and apply yourself to achieve greatness, don’t forget, Rome wasn’t built in a day.

You say you know “users are happier when they get search results that reflect their intent and help them achieve their desired action, even if it’s not a precise match for what they’ve typed. So we’re extending this behavior to ads”.

I’ll extend your behaviour sunshine. Just like when you gave us more QS data, you’ve got near matching wrong. 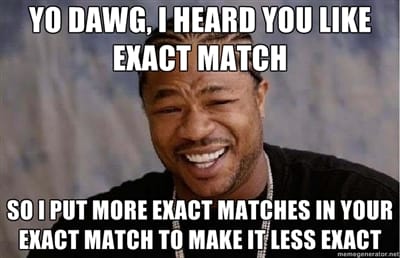 We’d have been quite happy with a new match type – near phrase maybe? But you’ve hit our match types with a sledge hammer by making this a campaign wide setting. Where’s the elegance? And why did you think it was best to make this a default setting? Yes, I know we can opt out, but you’re just making life harder for everyone.

And don’t think it’s gone unnoticed that you announced this change just after announcing a drop in CPCs – we can’t help but think the worst of you when you do that, Google.

You know what though, I could forgive all of that, Google, all of it, if it weren’t for one thing:

I just can’t look at you the same way now.

Don’t pretend you don’t know what I’m talking about – testing ads is the cornerstone of every great pay per click campaign and you’ve just gone and ruined it for everyone.

You’ve decided that if an ad doesn’t change in 30 days you’ll change from rotate evenly to optimise for clicks. You won’t alert us to the change in rotation settings and you’re more or less reserving the right to promote an advert based purely on CTR, whether or not that’s in an advertiser’s best interests. (FYI, I care about conversions, not clicks.)

You made this huge change, without giving us proper time to adjust our strategies. Two weeks notice just isn’t enough, you wouldn’t like it if someone did that to you now, would you?

I know, I know, Facebook does it all the time, but if Mark Zuckerberg turned off all the Facebook servers, put the company into liquidation and jumped off a cliff throwing money to the wind, would you do it too?

Thanks to @wayneb77, @RichardFergie and the entire @boomweb team for help coming up with parental clichés for this post. And to the PPC Memes team for the awesome exact match meme. Much obliged to you all.

Since this post went live Google have announced a u-turn on their ad rotation changes, and have extended the testing period to 90 days and are giving advertisers to opt-out of the new rotation settings completely.

This is thanks in large part to the petition set up by @iNeils, which received 607 email signatures, and by PPCers bombarding Google with disgruntled feedback. Well done guys, and kudos to Google for listening to our complaints. You may have started off on the wrong foot, but you’ll get there in the end. We hope.