This is part seven, and the penultimate part to Boom’s guide to social media for business, in which we’re going to look at how to cope when people say nasty things about your business online. Read parts one, two, three, four, five, and six to learn about getting set up on the right channels, creating a strategy, and engaging with your audience.

It’s pretty much mandatory these days for businesses to have a social media presence, yet many companies fear taking their brand online and outside the safety-net of their website. They fear that if they launch a Facebook page, or start Tweeting as a brand, upset customers will use these platforms to air their grievances.

But the truth is if you’ve ever annoyed a customer or customer-to-be, chances are somewhere on the internet that customer is talking about you. And that’s the same whether or not you use social media as a business.

If they’re talking about you on a blog, in a forum, or some other obscure corner of the internet, you’re unlikely to know about it. And if you don’t know about it there’s nothing you can do.

On the other hand, if they use your Facebook page to tell you what an ’awful’ company you are, you’ll know about it very quickly. And that gives you the opportunity to do something about it.

So what do you do about it?

First of all, don’t ignore – or worse, delete – any complaints.

Ignore a complaint and not only might the annoyed customer start resembling the Hulk, but also other customers (and potential customers) may well read the complaint. They may note that you’ve not even bothered to address the problem, and decide to give their money to one of your competitors instead.

Delete that complaint and forget the Hulk, this could go nuclear (but more on that later).

So what do you say?

Address the complaint as soon as possible. The longer you leave it, the bigger and greener the customer will become, and the more people will see the comment and the fact it’s been ignored.

When you respond, you need to be polite, friendly, and personable.  Your response should:

Here’s an example of a brilliant response: 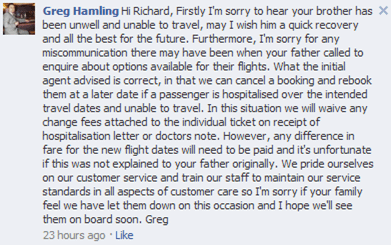 This response works so well because:

To illustrate the other side of the coin, here’s an example of a really bad response:

What makes this response so bad is:

In effect, a response like this says ‘we don’t care’. The fact is that you can’t claim to be listening to your customers if you don’t reiterate anything they’ve said.

When you get someone who just loves to complain:

Most brands will come across one of these people from time-to-time. They thrive on finding fault and will manage to turn the tiniest error into something worth shouting about.

Sadly, as much as we’d like to mock these people and hope they go away, if you want to stay safe you still need to treat them with respect. However don’t feel you have to pander to their whining and hand them the world on a plate.

Apologise for whatever they think the problem was, and if you think the complaint was unfair, feel free to share your side of the story. But try to do this as politely as possible.

In most cases, the complaint will be over something so minor that there won’t be any real solution you can offer. However it’s always a good idea to say something like “please feel free to contact me personally on xxxxxxxxxxx if you have any further queries”.

When the problem explodes:

If you’re really unlucky, when something goes wrong you won’t be dealing with one aggrieved customer on your Facebook page, you’ll be dealing with a viral case of bad publicity.

As with any complaint when things blow up in your face, the worst thing you can do is hide away. You need to be open, transparent, and honest.

In addition, you’ll probably want to cover all of these avenues:

So we’re nearly at the end of our guide to social media for business. Watch this space for the final part in which we will look at tools and methods for measuring your success in social media.