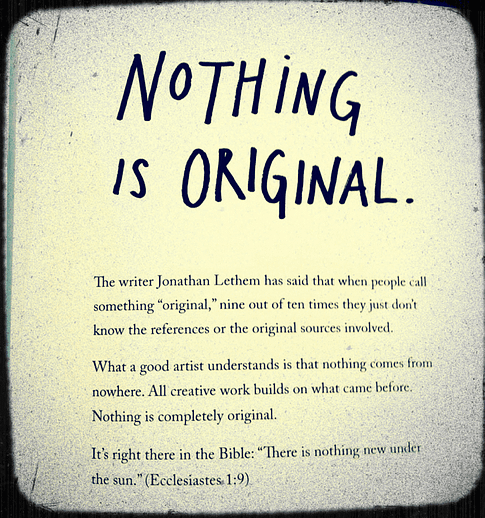 Nothing is ever truly original. Nothing.

No matter what you are working on it is always a mash up of what has come before.

This is never truer than when you are working on creative endeavours.

As digital marketers we now have to be more creative than ever.

A few years back processes ruled in SEO. Nail processes, scale that bad boy up and off you go. Success could be yours.

Google clamped down. They made examples of people, of businesses. Collateral damage happened. That actually started to enforce what they said they would all along. They just forgot to clamp down for a decade. That stuff worked (still does in some places nudge nudge wink wink).

Before you had to be the one with the most to win.

Now you have to stand out to win (and maybe a bit of having the most).

Oh, did nobody tell you? This content thing is hard.

You need to stand out. You need to be different. Oh – and you need to be able to do that on tap. Creativity day in day out. Without the luxury of waiting for inspiration to hit…..

The Stones and The Beatles stole. Scorcese and Spielberg steal. Bukowski stole. Even Dan Brown steals. I think you get the idea.

And I stole it.

However, there’s a difference between good theft and bad theft.

Seem familiar? You can apply it to pretty much anything.

I started applying the concept to lots of work based things.

I started to worry less about being truly original and more about how I created better stuff by mashing up influences, by taking what I had succeeded before and improving it.

Content I worked on became Frankenstein’s Monster hybrids of the things that I found on my way to the ideas.

Even the processes that we put in place for getting to the content we were creating were patchwork quilts via Bernd Rohrbach via Stacey Macnaught via Chip and Dan Heath via the guys at distilled via chunking up via neomalalalmamamammama.

You get the picture.

Don’t worry about being truly original.

Take everything that you can find and mix the best bits together….

Please accept marketing-cookies to display this embedded content
Crap. The Content Marketing Deluge. from Velocity Partners
(also Dave Trotts sentence structure – without any discernible story or narrative and Jack Kerouac’s “write and dont worry about editing” shtick – without any of the talent).