One of the most appealing things about an SEO campaign is that it’s measurable. Google Analytics and similar tools can track the return on investment of budgets in detail. It’s the kind of reliable reporting that a traditional marketing campaign could never dream of.

SEO companies have traditionally reported on Search Engine Results Page (SERP) rankings as customers have focussed on these metrics. The past twelve months however have shown a degree of instability in the SERPs with quite high fluctuations in positions over the course of a month. 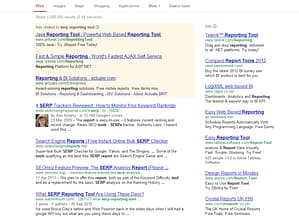 We have also seen the implications of focussing too heavily on particular pages of a website. Onetime white hat techniques for building links can now generate the much feared “unnatural link” warning in Webmaster Tools.

This has led us at Boom and the wider SEO community to re-appraise both our campaigns and reporting strategy. We’re working on ways to update our SEO report templates to look more holistically at the performance of a customer’s site, rather than focussing on individual keyword performance.

Looking at metrics such as unbranded organic traffic, revenue generation and social engagement give a much fuller picture of SEO success than SERPs can on their own.

And that’s just as well, as it is now getting increasingly difficult to get rankings data:

Scraped Data and the Google API

It seems that Google is having a crackdown on developer access to its AdWords API, which provides data on search volumes, among other useful features. The terms and conditions of AdWords API access state that companies can’t offer official Google data alongside unofficial “scraped data”.

“Scraping” is a technique for using automated scripts to copy data online. Rankings are collected by running an automated search for a keyword on Google, then scraping the results.

The technique is a huge time saver, but thanks to Google’s current clean-up, it’s threatening the future of providers of SEO tools.

Over the past few weeks we have seen some of the leaders in SEO reporting talk about these latest developments:

In November Aaron Wheeler of SEOmoz explained that they (SEOmoz) had been informed that their access to the Google AdWords API has been revoked. Other SEOmoz staff members say the reasons behind this are unclear, but nothing more has been said.

This leaves a question mark over the future of some of their tools that is still to be answered.

We have also heard more recently from Patrick Keeble at Raven Tools on their decision to stop using scraped data from January 2013.

Raven’s position is quite clear: the risk of losing access to the AdWords API far outweighed the perceived benefits of continuing to offer rankings data to their customers.

We strongly encourage you to read the full post, but to sum up, Patrick believes that scraped data just “isn’t worth it”. He believes that it will be impossible for any software company to continue to provide both scraped and AdWords API data.

And more than that, he states, “I’d rather provide tools and data that prove ROI, conversions and goals, not simple rankings.”

Just days after the Raven announcement came this from Ahref: “We decided to stop paying for scraped data as it violates Google’s Terms of Service and puts our service on shaky ground nowadays.”

The Future of SEO Reporting

So where does this leave the world of SEO reporting?

As Google offers ever more personalised results for location, browsing history and social connections, the concept of a single “Google ranking” is already becoming obsolete.  The loss of this data in some of the best tools available just helps to accelerate the decline.

As SEOs we have to educate our customers and make sure they are aware that SERPs are just one piece of the puzzle. Getting an accurate picture of the performance of a site can only truly be discovered from combining a number of metrics.

We should be working to build sustainable brands for our customers. We should be bringing quality traffic to their site. We should be helping to improve their bottom line: to get more leads and more sales online.