This month I’ve decided to stray away from traditional marketing topics and share some of my recent experiences. For the past few months I’ve been focusing on promoting one of our client’s charity runs. It’s a 5K fun run that is available nationwide; their budget isn’t huge, but as Ross Simmonds explains, you don’t need a big budget to get the job done! To maximise exposure, I decided to market the event via their social media accounts on Facebook and Twitter.

My first task was to build up their social following. Whilst both accounts had a fair follower base, I knew we needed more to make a real impact. The budget restrains were a challenge, and did limit the number of promotional avenues we could take, however, the project was still a success! I’ve learned some valuable lessons over the few months and wanted to share them with you.

One of the most valuable things I’ve learned during promoting this run was the importance of reaching out. In every way it paid off; whether the people I contacted were organisations, influential people in the industry or the venues we’ve partnered up with. They all helped with the promotion in one way or another. The one that made the most impact has been the support we got from other charities.

About three months ago a simple message to a number of charities who organise similar events to our charity were sent. It simply explained to them what we do and seeing if they’d be willing to share it with their followers. At this point there weren’t any major expectations but it led to some amazing results! At the time of the ‘shout out’ our charity had about 500ish likes on Facebook, over the course of the month that number almost doubled!

A simple but effective shout out from a few supporting charities and organisations led to receiving new likes from people who were genuinely interested in the cause. Below are some figures to demonstrate how the ‘support system’ benefited our charity: 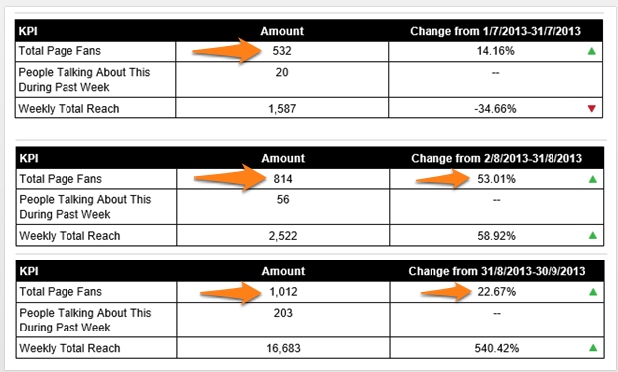 The number might be dissatisfying to some who were expecting a couple of thousand likes, but for a small charity it’s a great success.

The new likes didn’t just make the Facebook page look pretty; it also led to more participants and new followers who were interested in the updates that were posted. I believe it was successful because only the relevant charities were contacted. The relevance meant that a justification or an explanation wasn’t a necessity and the charities already knew that their followers would be interested in knowing about our charity run.

The support system for our charity didn’t finish at just reaching out to the charities, we reached out to the venues the runs would be held at as well and asked them to support our cause. They happily co-operated. We also identified the influential people who would be interested in our cause for some extra support – that worked too!

Lesson: The support system is priceless, don’t be shy to ask for help and always reach out to others.

Our audience was clear from the day I started working on this project so there were no issues with identifying them. There was however the slight issue of the tone of our messages. The organiser wanted to attract people to do a ‘fun run’ so dress up and have a good time whilst raising money for a great cause. Yet the tone that was used was ‘strictly business’.

I’d like to clarify that we weren’t being picky about the participants. The organiser wanted to highlight the fact that as a charity they really wanted the participants to have fun.  Therefore I decided that the tone of the messages had to reflect that and invite the serious but not so serious runners to want to participate.

We started updating the social media accounts with more personalised, humorous messages. In no time we got more engagement. By being more personal and less corporate, and adding a pinch of humour in there I think we were able to show our human side. We saw a trend that our ‘funnier’ tweets got more attention so we focus on making sure we included something humorous for the followers’ entertainment.

Lesson: Test to find out which tone your audience will respond to the most, once you find it – stick to it!

Some of the runs took place at very well-known venues such as Pride Park in Derby, Battersea Park in London and The City Ground in Nottingham. This lead to some great PR for the charity that we weren’t expecting and, in all honesty, were a little under prepared for.

Once we started noticing articles on high profile publications, it became obvious that we had to track the charity to keep up with the mentions. We used the following web apps to keep track:

We then went through the mentions and chose the appropriate ones and asked them to link to our charity. We contacted them on behalf of the charity to avoid any confusion and had some great response! It literally took no effort to set up tracking and wait for the juice opportunities to pour in!

Lesson: Track your event and charity to make use of every juice opportunity!

Marketing a great cause and receiving a lot of positive feedback was a great experience. We won’t know the total raised until next month but so far the amount of participation signals they’ll be better than the previous years!