We’ve had some real fun and games with Google’s Product Listing Ads over the last few weeks. These are, of course, the pay per click shopping ads that replaced the organic shopping results in March. They work by linking a Google Merchant Centre feed to an AdWords account, which allows you to add a Product Extension (actually retired since PLAs came along) and then use Auto Targets to set rules about which products from your feed should be used in ads, your maximum CPC for those products etc. 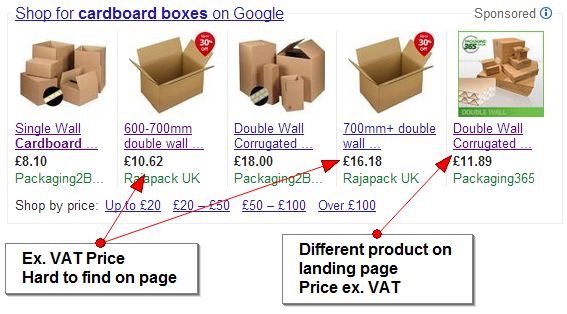 The main issue we’ve come across is merchants being notified that their feed does not meet Google’s feed specification, usually a mismatch between the price in the feed and the price on the landing page. However, upon checking the examples provided by Google (when there are any), the prices match. Google’s pricing policy states that the price in the feed and on the landing page must include VAT and that where there are quantity price breaks, the price must be for the lowest quantity (usually the highest per-item price).

Imagine our surprise then, when more than one client has received notification of a pricing infringement, followed by account suspension, despite the fact that the examples provided (suggesting that there is inconsistency between feed prices and landing pages prices) are simply wrong. Fair enough, you might think – just send Google a note explaining why they’re wrong and things should carry on as normal.

My guess is that with the launch of PLAs, Google has employed an offshore team (an assumption from the less-than-perfect English in their emails) to police/support Merchant Centre. They haven’t had sufficient training and as a result they are misinterpreting Google’s own policies. For example, we have an ongoing issue where a feed has been suspended because apparently the price in the feed is different to the price “in cart(landing page)”. Nowhere on the landing page is the price different – it is shown both with and without VAT, but the inc. VAT price is far more prominent. There is no issue with quantities as all items are listed individually.

The email from Google seems to be saying that because the shopping cart shows prices ex. VAT (tax is added to the total at the bottom – hardly a rare layout), it breaks Google’s policy. Of course, there is no reference to the shopping cart experience in Google’s policy – only the price on the landing page, which is wholly compliant in this case. We are now two weeks into the support process, without a single email in response from AdWords Support. We’ve had a phone conversation with them, but they weren’t able to resolve anything because they don’t deal directly with Merchant Centre stuff. Three working days later, they still haven’t called back with the solution that is coming “ASAP”…

Meanwhile, our experience a few weeks ago with another client was similarly perplexing. The Merchant Centre team spent several days informing us (via our AdWords rep) that the feed was disapproved because the price in the feed didn’t include the shipping cost. Remarkable, because that is clearly not the feed specification – you either supply the shipping cost at item level in the field using the <shipping> attribute, or you set your shipping rules in Merchant Centre (as was the case here). It took quite some time and repeated explanations that the Merchant Centre team’s understanding of their own policy was simply wrong. Eventually, without any alterations to the feed, it was approved.

The frustration of this situation was compounded by the various policy-flouting competitors that to this day are still running PLAs. We have seen various combinations of the following:

So why were these two merchants singled out? My guess is that because they both have new sites, new feeds have been added to Merchant Centre and this has flagged them for review with Google’s team, i.e. new feeds are given a priority review above existing feeds. Presumably, all merchants will eventually have had their feeds reviewed. Not much comfort for those merchants who see their competitors raking in the sales whilst they sit impotently on the sidelines waiting (and waiting) for a response from Google as to why their perfectly-formed feed has been suspended.

All of this was topped off this week when we took over an existing PLA campaign and found that there is no data in AdWords for it, despite the fact it is clearly displaying ads. We have restructured and added a lot of new PLA campaigns and groups, still none of which show any data. Of course, the AdWords Ad Preview tool doesn’t show PLAs, so you can’t even try and diagnose what’s going on with that (although some ad hoc searches on Google show the ads are live and running well). Naturally, I haven’t had a response to my support query about this one either. 🙁

Of course, it isn’t just our merchants losing out on revenue as a result of these problems – Google is too. PLAs are one of Google’s main sources of additional revenue this year and I can only hope that someone with some authority in Google is looking at the situation and planning some serious, rapid improvements. While they’re at it, please add Merchant Centre accounts in to the My Client Centre setup so we don’t have to log in separately to everyone’s Merchant Centre accounts. Thanks.