I realise I was a little down on Google in my last post, but never let it be said that I’m not fair, so let’s take a look at some recent AdWords innovations that are great. 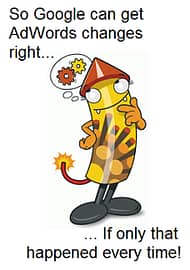 Some have been a little sceptical about auction insights, which lets you see who you’re competing against in the auction. It’s easy to see why: Google is offering up data about who you’re bidding against for a given keyword and how often they appear above you (among other stats). The automatic assumption is that this would lead to a bidding war.

Yes, I can see that happening, but I think there are far more interesting uses of the data . For example, building out your negative keyword lists or borrowing ideas from the landing pages of your top competitors.

Even if you do want to use the insights for bidding, the only way isn’t up. As PPC Hero points out, you can also use it to see where you’re overbidding and bring your bids down accordingly.

Two innovations both designed to improve the performance of mobile campaigns:

I haven’t yet had chance to get stuck into these two new options, but I can see enormous potential. Google has been clear that they believe mobile is the future, so it’s great to see them offering enhanced mobile options for advertisers.

Bored of sifting through pages of keywords from the keyword tool? Let Google sort their suggestions into ad groups for you!

As with everything (it seems) in AdWords, you’ll need to refine the suggestions once you’ve downloaded them – do you really trust totally computer generated groupings? But, the ability to discard an entire group of irrelevant terms pre-download with one click has already been a massive time-saver for me.

So, do you guys like, loathe or just feel indifferent to these changes? Are there any innovations that you love that I’ve missed? Let us know in the comments below.