More and more businesses are using YouTube to get their name out these days. As well as finding all kinds of amateur footage captured by anyone, companies are creating professionally shot adverts and informative videos with which they market themselves.

I’ve written about optimising your YouTube channel already in an effort to get the most views for your videos, but more goes into good video marketing than simply making sure your video has a great and relevant title.

It’s not just about businesses either – the following tips can be applied if you’re running a channel and trying to make it big on your own.

It seems simple to say but a lot of people seem to get this wrong.

It doesn’t matter if you’re a vlogger or you’re filming an advert – higher quality footage and audio with a good speaker/presenter/actor will make your video look far more professional. Transition effects usually come across as tacky and distracting, and lack of a real point or focus behind the video will become apparent to a viewer quickly.

This isn’t always the case. Videos can become viral even if they’re not well filmed. Take a look at this video of a woman trying to park her car in Belfast that’s recently gone viral, for example.

You don’t need a massive budget to generate a lot of views, either. Check out this video, which has racked up over 55,000,000 views at the time of writing despite obviously being made on no budget just because it’s so funny.

When your video is getting millions of views it is going to be hard work keeping up with all the comments that are coming in. However, it’s unlikely your first video will reach that level so quickly.

Replying to the people in the comments section is important. People like people. They’ll feel you’re more friendly and are more likely to comment again. It can also sway someone’s opinion on a video if the uploader talks to them, and they’re more likely to hit that all important Subscribe button.

But not everyone will be nice when they comment on your video. The ever present YouTube troll will always be out to voice their negative opinion. How you handle this is your decision – but remember any reply will be public and may be feeding the reaction they desire. A quick delete of their comment and a block of their account can be far more effective.

Alternatively, a great way to get the name of your channel out there is by commenting on other people’s channels and videos. Insightful and interesting comments on a popular YouTuber’s latest video might be enough to get them to check out your channel and maybe even promote it.

3. Brand your channel and videos

Like I said at the start, these tips can apply to business or if you’re hoping to get popular online on your own.

YouTube gives lots of branding options for all their partners, allowing you to set up your profile and videos in a way that makes them instantly recognisable.  These options also allow you to link out to your website and other social media accounts, which is great for transferring some of those views into traffic!

At the moment YouTube is transferring channels from the old format to a new, simpler layout that YouTube state is easier to use for both viewers and uploaders. Here’s how the BBC have branded their YouTube page using the new layout: 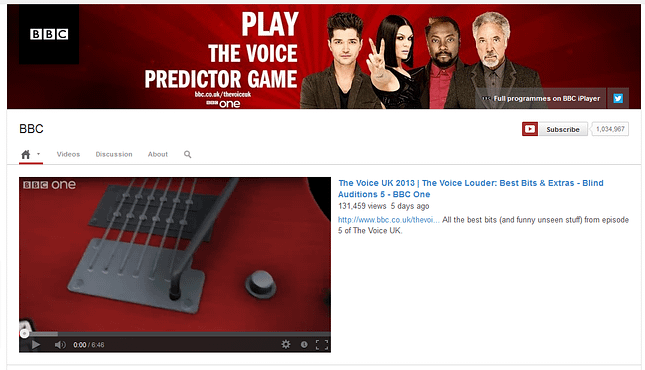 And, again, you don’t need to be a big business to bother branding your page. Here’s how one of the biggest YouTube vloggers charlieissocoollike brands his page: 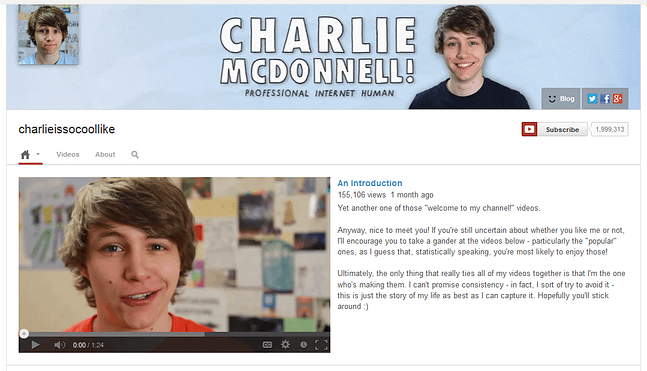 You will gain subscribers if you’re making good content on a regular basis (see point 1).

The longer you go without releasing a video, the more the interest in your channel will die down. Some of the most popular YouTubers stick to strict schedules so that their subscribers know when to check for another video. Vlogger Jenna Marbles releases a new and interesting video every Wednesday and has now become one of the most popular women on the internet.

Whatever you do – don’t overload your subscribers with lots of videos all at once. This’ll give them far too much to watch in one go and they’ll more than likely miss them all. Instead, space out your uploads over time.

You should also find a niche and stick to it. Let’s say you post DIY videos, for example. Your subscribers will come to you expecting to see DIY videos, so when you post something drastically different like a comedy sketch, most will be confused. To avoid this issue, some YouTubers have separate channels for different styles of videos – popular comedy video maker TomSka posts his sketches to the TomSka channel, while he posts vlogs to another channel.

5. Don’t go all out to sell your products

If you’re a business, it’s going to be tempting to use YouTube to sell your products. While some people will visit YouTube to watch product demonstrations, hardly anyone is browsing to be sold to.

Instead, consider a video that’d draw in more attention. Something useful, interesting or informative is more likely to get a viewer’s attention – and it’ll build up trust for your brand so that when they want to buy they know where to go.

B&Q occasionally upload guides and how to videos which always get a lot of views – but they let themselves down by an irregular upload schedule.

If you’re going to focus on selling your products, at least take note of the Old Spice channel first. They have mastered making hilarious videos that stick in your head while clearly advertising their products.

Have you got something to say about posting videos to YouTube? Let us know in the comments below.